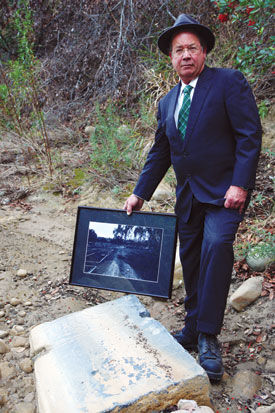 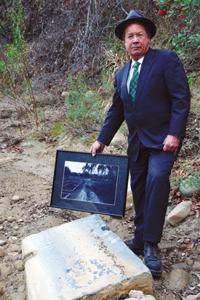 If the dead could talk, there’d be over 3,000 voices speaking up about what to do with Cemetery Park.

That’s how many people are said to be buried underneath the grassy sprawl of the historic downtown Ventura landmark, the graveyard-turned-dog park whose future identity is causing friction among at least three camps of people:

Preservationists, with a long-standing dream of reverting the park back to its original use as a pioneer cemetery; recreationalists who prefer that it stay in its current incarnation as a social meeting spot for dog owners; and officials from the city and a local conservancy, looking to strike a middle ground by turning the parcel into a memorial site.

But while a set of conceptual plans for the park will be unveiled at a Nov. 19 public meeting at the Community Presbyterian Church on Poli Street, it’s doubtful a compromise can be reached to please everyone, according to those on competing sides of the issue.

“There isn’t a middle ground. That’s the problem,” says Steve Schleder, the principal organizer for a total restoration of the former St. Mary’s Cemetery back to its original state.

Crumbling conditions necessitated the removal from St. Mary’s of thousands of aging headstones in the early 1960s, erasing nearly every indicator that the parkland interred thousands of Ventura’s original residents. It became popular as an open space park and, by association, has been unofficially considered such ever since, with the occasional token flat grave marker here and there.

Activists like Schleder believe the new concept plan, a costly, $4 million open space effort envisioning a combination of memorial grave markers, a veterans walk and an ornate memorial wall, isn’t enough to give the dead their due.

According to Schleder, the idea only further tarnishes what the park was designed for. On top of that, he notes, the new plan may even violate certain federal and state laws that require cemeteries to be equipped with peripheral fencing, a locked gate and proper visiting hours. Cemetery Park has none of those.

“The city’s attitude with this whole thing is so callous,” he says. “They don’t look at this as a cemetery; they look at this as a problem. They’ve learned in the past to throw money at problems. This problem won’t go away if you throw $100 million at it. We have to return the dignity and respect, and that’s what the city is refusing.

“We’re talking about the resting place of our pioneers.”

Park enthusiasts say they respect that fact, but favor keeping the land a dog park if only out of pragmatism; $4 million for any project is too costly in these tight economic times, they maintain. Plus, the social bonding between residents and their pets serves well those living in the here and now — with all due respect for the dead.

“We’re building a sense of community here,” says Barbara Yontz of Ventura, while at the park late Monday afternoon with her family. “We meet friends here. To me, that’s what parks are about.”

Ginger McKay, who was visiting the park with her dog, is circulating a petition opposing the memorial project. So far, said the Ventura resident, a few hundred signatures have been collected.

Both women balked at the project’s price tag, suggesting the city forward the money toward arts or education, and leave the dog owners alone.

Amidst all this, Stephen Schafer, president of the San Buenaventura Conservancy, backs the memorial park project as a good balance between what the park was before, and what it is now.

“I’m of the mind set that it’s a cemetery until you remove everybody,” he says. “It’s not a park per se. It’s just been a de facto park. I think it’s as disrespectful to use it as a park as it is to play Frisbee down at (Ventura cemetery) Ivy Lawn.”

Schafer continued, “What needs to be established is the direction of this open space is not going to move towards playgrounds and jungle gyms. Every park evolves. Every park gets remodeled and landscaped.”

For one, Schafer noted, there’s been a community disconnect over one very important detail: the project’s proposed cost. The city employed a Santa Monica-based design firm to draft up the concept, drawing $25,000 from the arts budget. But to think the $4 million remodel will come at the sole expense of taxpayers is false.

According to Mike Montoya, the city’s deputy director of public works and parks, if the city council green lights the project, the majority of money to pay for the project would come through grant funding.

Schafer hopes the Nov. 19 meeting will serve to clarify such public misunderstandings and bring people onto the same page.

“There are a whole bunch of desperate viewpoints,” he says. “I don’t think they’re 100 percent aware of the big picture that’s going on below them because time has erased that. I think that’s the disconnect. The thing is, how can we best get this together?”

Schafer is more confident a middle ground of public opinion on Cemetery Park can be reached, though it will be difficult.

“The only way to make some middle ground is to have a lot of dialogue,” Schafer says. “The best thing we can hope for is something that benefits the community that doesn’t make people on both sides terribly unhappy.”

“There are details of the plan not accessible to one side or the other,” added Montoya, “but they’re not insurmountable issues.”

Schleder doesn’t convince easy and hopes to bring to the table his own plan for cemetery restoration, along the lines of volunteer work. It would cost the city and its residents next to nothing, he claims, for beautifying and landscaping the park, and replacing headstones that currently sit in storage.

“There are a lot of people interested in restoring this cemetery, and they’ll do whatever it takes,” he says.

He continued, “This isn’t about us; it’s about the dead. This isn’t a feel-good, new age kind of thing. This is somebody’s grave, point blank, and that’s that.”

The Cemetery Park community meeting will be held 5:30 p.m. on Nov. 19 at the Community Presbyterian Church, 1555 Poli St., Ventura. Proposed plans can be viewed online at cityofventura.net, or in person at the Cemetery Park fence, between Main and Poli streets. E-mail Paul Sisolak at paul@vcreporter.com