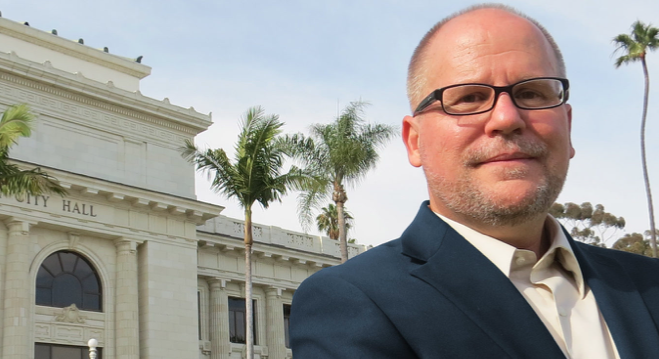 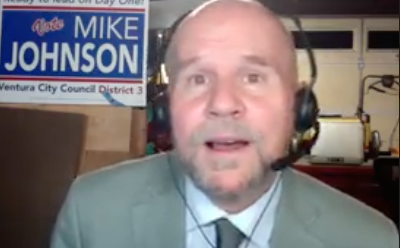 A Ventura City Council seat up for grabs due to new district voting rules fostered a field of four candidates, creating a situation ripe for splitting the vote. As of press time, ballots are still being counted, and ballots received before Nov. 20 will be included in the final results with an official certification of the election taking place after that. But based on voter tallies, it’s not likely that anyone will reach Mike Johnson’s numbers in the race for District 3.

“I was the underdog, it’s nice to have a decisive victory,” said Johnson, speaking with the Ventura County Reporter on Monday, Nov. 9. “There were plenty of people that were convinced I didn’t stand a chance. It wasn’t me they underestimated; it was Ventura.”

His campaign was up against special interest PAC money. Noting how he succeeded against that, Johnson said, “I just picked my lane and stuck to it. I ran on me, my background, my positions, my history in the community . . . Money is necessary but not sufficient. Money helps you get your message out, but your message has to be convincing. Money wasn’t ever going to beat us . . . When you add in the special interest PACs, we were outspent, like, three to one, and they could have outspent us 100 to one and my volunteer army still would have prevailed.”

Johnson had 40 active volunteers working on his campaign, “writing postcards, making phone calls, putting up signs. My top two were Sam Coates, he’s 19 years old, and Carol Lindberg, she’s 83. That is why we won. I didn’t have a single block. I had support from the seniors, from the Young Democrats, from parents. I had the support of the nerds. Somebody dismissed my campaign as ‘aiming for the nerd vote.’ I’m proud to be a nerd, this is Ventura. We look to the nerds for guidance, not the rich kids.”

As he prepares to be sworn in with the other new councilmembers on Dec. 14, he responded to a question about the overarching issues of housing and development through the lens of available water. Johnson said his experience “going to the [Ventura] Water Commission [meetings] for years and years now” will be helpful. “It will be good to have someone on the council that has that kind of background. Water is going to get more expensive. That decision was made long ago. I’m not going to be able to change that . . . it’s going to be quite a bit more expensive, and that is true throughout Southern California and the western United States. Part of it is climate change and population growth . . . water has been historically underpriced in the west for the last century and the bill is coming due.”

Johnson opted to not weigh in on the water adjudication matter commenced by the city of Ventura last year, saying, “So much of what happened [took place] in closed session . . . I have no idea what happened and I look forward to finding out. But generally, broadly speaking, it is important we mend fences.”

When asked about something he was looking forward to working on, he said, “Making progress on broadband. We are 10 to 15 years behind. If you think about what we’ve been through in this pandemic . . .and the disadvantaged community,” he will be working to “really bring good broadband, and bring it in a way that prioritizes our disadvantaged community. So they get hooked up first, not last.” He points out the issues school districts had finding “ways to connect students to the Internet so they can go to school.”

In terms of official preparations to take office in December, Johnson said he hasn’t heard from city staff at all.  “I’m sure that I need to go through some form of Brown Act training before I’m up on the dais; I hope there is more than that.” But he said he’s already somewhat aware of parts of the Brown Act and even though he’s not in office yet, he is being mindful about not engaging in “serial meetings,” when elected officials speak or communicate with others on the same elected body, resulting in a majority discussing issues that may come before them.

Making the decision to run for office can be a difficult one, but for Johnson the decision made sense. “I’ve been involved in the College Area Community Council for so long and with a district election it was important to me that we have a representative that has demonstrated a commitment to the community.”

“I didn’t see anybody that I would be willing to support if they ran,” Johnson explained, “and so, because I had the opportunity, I felt like I had the responsibility.”