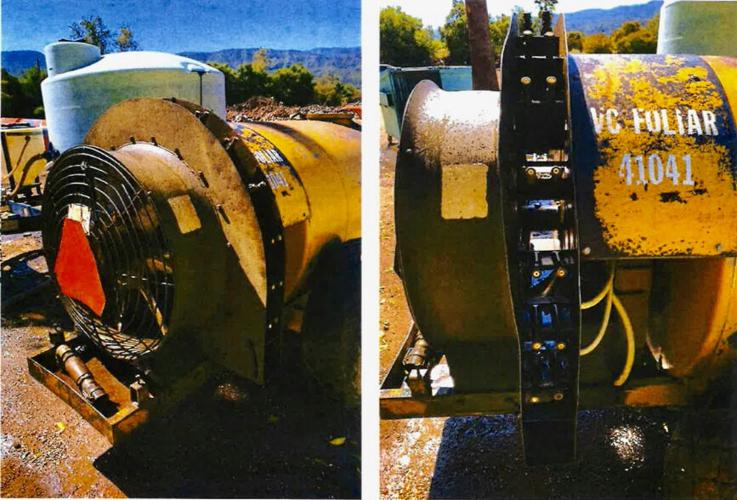 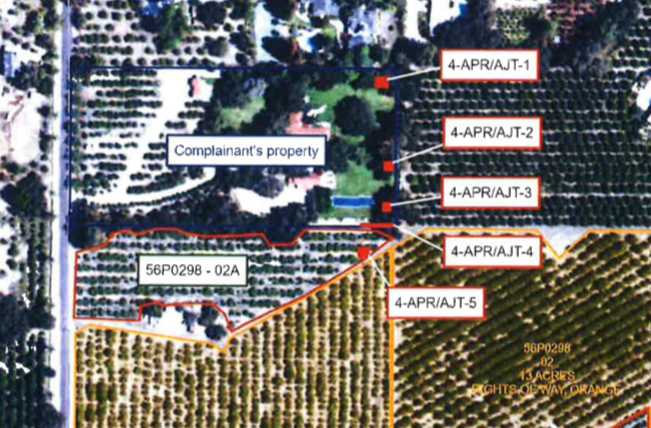 A map from the County Agricultural Commissioner’s report on the violation showing the sites were residue from pesticide sprayed on nearby orchards was found on a residential property.

The office of the Ventura County Agricultural Commissioner (VCAC) has confirmed that VC Foliar, a Ventura-based company, has been fined $4,000 for two violations related to state laws governing pesticide spraying after its spraying of citrus orchards in Ojai resulted in pesticides drifting onto a neighboring residential property.

“Toxic pesticide drift is real,” said Rebecca Tickell, a resident of Ojai and part of a group called Regenerate Ojai that is working to eliminate pesticide use in the Ojai Valley. “There is now science from our community to back up what residents already know and experience to be true.”

The investigation began as a result of a complaint received by the California Department of Pesticide Regulation (CDPR) on April 3, 2020, of spraying on McNell Road between Grand Ave. and Highway 150. The spraying was reportedly drifting onto a neighboring residential property.

The investigation was conducted by Alec Thille, agricultural inspector/biologist associated with the VCAC’s office. According to the investigation report, Thille interviewed the sprayer, Robert Davis III, owner of VC Foliar, multiple times regarding spraying that took place April 1-3. In those interviews, Davis stated he had not tested wind speed prior to spraying but had relied on the lack of movement of the blades of “fixed air circulating fans” to determine that wind speed was under 15 mph, the threshold for when spraying is allowed.

Thille also collected samples of foliage from ornamental plants and oak trees on the residential property next to the orchard. Lab testing revealed that all samples collected contained the active ingredient  in the pesticide and the gradient pattern of increasing exposure nearing the sprayed orchard indicates the source of the pesticide. Thille eliminated other sources through checking spraying schedules from nearby orchards.

The notice states that VC Foliar sprayed a pesticide called Danitol® and IAP Summer 415 Spray Oil using an “air blast sprayer to citrus orchards,” and that Davis “failed to measure the wind speed on the upwind side of the field prior to application as required by the Danitol label.” In addition, “VC Foliar applied the pesticides when wind favored drift off target, when there was a reasonable possibility of the contamination of non-target property or persons not involved with the application process, resulting in pesticide residues detected on a private residence immediately north of the application site.”

Davis has 20 days from the date of receipt of the notice to indicate if he will appeal. He did not respond by press deadline to requests for comment.

The June 17 VCAC notice of violation states, “Foliar samples collected by VCAC confirmed that Danitol did drift off target, leaving residue of fenpropathrin, the active ingredient [in] Danitol, on all samples taken from the residence.”

State law (CCR Section 6614) and label requirements require wind speed be measured just before application during ground application and that application is only done when wind direction “favors on-target deposition.” The notice of violation states that spraying took place “when wind was blowing from the treated orchard to the northeast, toward the residence.” This created a situation with a “reasonable possibility of contamination of nontarget private property and of persons not involved in the application process.”

The $4,000 fine is a result of two Class A violations. Fines can range from $700 to $5,000. Sprayers may expect higher fine amounts during the pandemic as direction from the state is supporting county agricultural commissioners to strongly enforce all existing laws to protect public health.

Ventura County Agricultural Commissioner Ed Williams told the VCReporter ????when???? that he is strongly encouraging all growers to notify all neighboring residents about any spraying near homes even though it is not legally required and that violations of spraying regulations are being taken very seriously.

Williams did confirm the CDPR’s declaration that violations of pesticide spraying regulations that occur near homes and schools will be viewed as a “Class A” violation resulting in maximum penalties.

On May 26, Williams, issued a letter to all growers in the county emphasizing existing notification rules (Cal. Code Regs., tit. 3, § 6692.) that require growers who are spraying properties within 14 miles of school sites to provide an annual list of pesticides that are expected to be used from July 1 to June 30 of the following year.

Williams also cited the DPR’s statement encouraging all county agricultural commissioners “to have growers provide appropriate notices to nearby residents, to the extent feasible,” which “encourages good neighbor communication practices to residents, families and schools, during the COVID-19 emergency.”