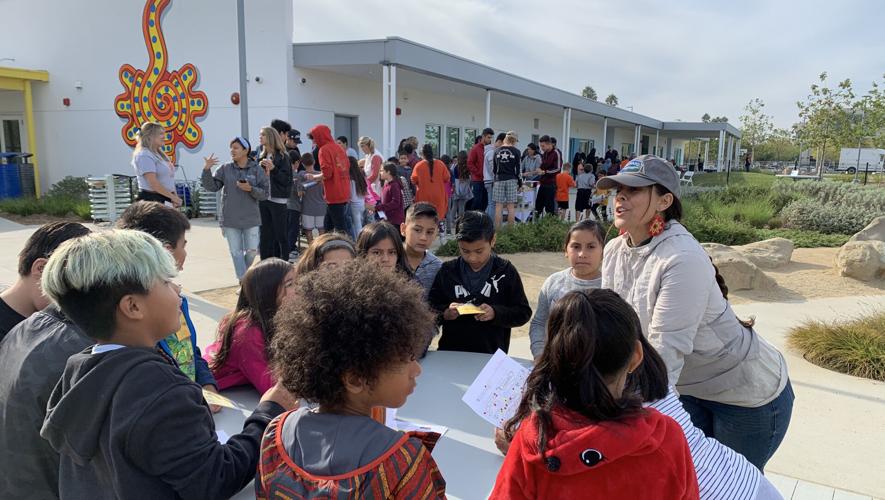 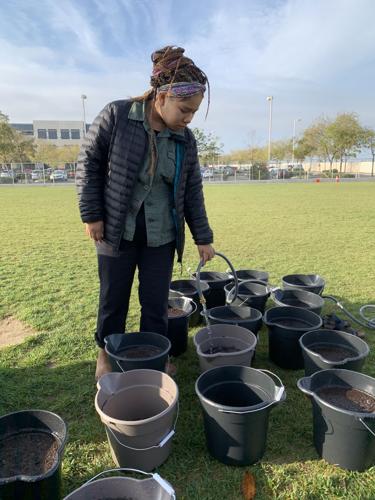 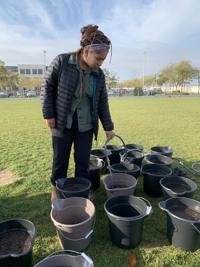 Sarahi Noyolo, a junior at Oxnard High School, volunteers with Encampment for Citizenship. She is preparing buckets for a compost tea session at Rio Del Sol School on Nov. 15. Photo by Emmma Aist.

Pictured: During the Compost Tea Party on Nov. 15, at Rio Del Sol School in Oxnard, Dr. Linda Quiquivix with The Abundant Table speaks to first and third graders about native and medicinal plants. Photo by Emmma Aist.

On Friday, Nov. 15, about 800 community members and volunteers converged on the campus of Rio Del Sol School in Oxnard for a day of hands-on workshops, tastings and activities in support of the school transitioning to a fully organic campus as part of the Pesticide-Free School Project, that began this summer with a Compost Tea Party at Rio Lindo School in Oxnard.

“The Pesticide-Free School Project is born from the desire to build soil on public maintained land,” said Florencia Ramirez, an Oxnard resident and local author (Eat Less Water) who helped organize the event. “Healthy soil can hold more water and carbon than soil treated with chemicals like herbicides and petroleum-based fertilizers.” Instead, compost teas and extracts will be used annually and, as soil health returns, phased out.

Students and volunteers applied compost tea to flower beds and grass areas on campus “to begin the process of building the soil,” said Ramirez. She said the concept of the Compost Tea Party is to spread the pesticide free plan to other schools, parks and government managed properties, like the Ventura County Government Center. “The blueprint will be made available as an open source online for any groups to replicate.”

Ramirez worked closely with youth leaders from Encampment for Citizenship (EFC), a national youth organization. EFC hosted a three-week summer camp this year at California State University Channel Islands and those participants created the Pesticide-Free School Project as their service learning project with EFC. The organization received a $12,000 grant from Patagonia for the program.

“The success of the event was a reflection of the many partnerships formed during the process,” said Ramirez. The project involved school administration, staff, faculty and the Parent Teacher Organization working with area experts including Dr. David White from The Center for Regenerative Agriculture, Integrated Pest Management specialists from Rincon-Vitova Insectary, the farm to table program of Oxnard Unified High School District and the Abundant Table. Ramirez noted that they all came together to “reimagine the role of soil as a solution to store carbon and water.”