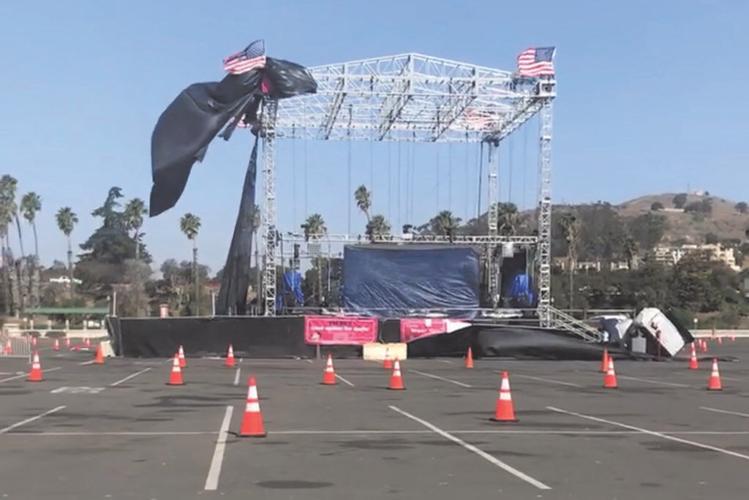 The roof of the Concerts in Your Car stage in Ventura blew off for the second time during heavy winds on Dec. 7, 2020. Photo by Vincenzo Giammanco/CBF Productions

An electric guitar signed by Buddy Guy is one of several collectible instruments currently being put up for auction by The Canyon owner Lance Sterling. Photo courtesy of The Canyon

PICTURED: The roof of the Concerts in Your Car stage in Ventura blew off for the second time during heavy winds on Dec. 7, 2020. Photo by Vincenzo Giammanco/CBF Productions

Two concert venues that have made live entertainment possible during the pandemic will end 2020 on a quiet note. Live music and comedy at the Oxnard Performing Arts Center (OPAC) as well as Concerts in Your Car at the Ventura County Fairgrounds are on hiatus for the rest of the season.

Wind damage ends the season for Concerts in Your Car

Blame it on the weather.

The massive stage at the Ventura County Fairgrounds, viewable from all sides and equipped with state-of-the-art sound and lighting systems and oversized screens, lost its roof during the 35 mph Santa Ana winds that blew through the county on Dec. 7.

“It was like a hurricane came through,” said Vincenzo Giammanco, founder and CEO of CBF Productions.

This was actually the second time the stage, built over the summer, lost its roof: It blew off the first time about six weeks ago. Giammanco described the damage caused this month as, “The nail in the coffin. The roof blew off again. We had to take down the stage to verify the integrity of the steel. And the sound board and fencing were damaged . . . financially it didn’t make sense to keep going.” Giammanco estimated the collective damage at $60,000.

While the final music concert, featuring Iration, took place on Dec. 4, the venue had to cancel scheduled performances of The Nutcracker ballet and Santa Saves Christmas!, as well as all film screenings offered through the Movies in Your Car series.

“We got through 98 percent of the season,” Giammanco said. “So we’re grateful for that.”

Happily, the Holidays in Your Car light show was not affected, and the drive-through experience can still be enjoyed nightly through Jan. 2. Giammanco said that “the response has been great! I feel like a lot of people need something like that right now.”

Looking back on the concert series, which debuted in June with a performance by Ventura native Super Duper Kyle, Giammanco said that it’s been a surprisingly good ride.

“I think it was better than expected. I had this vision of how it was going to be, and it formed into this new entertainment space. There’s something about hanging out with your own friends and family in a car in front of this big stage. It’s a new way to enjoy live entertainment.”

CBF’s Del Mar Fairgrounds location continues full force. And the company plans to build on its success in Ventura next year, when it reopens in the spring of 2021. While he couldn’t name names, Giammanco promised that good things are ahead.

“We have a lot of interest from a lot of artists — high-caliber people that traditionally wouldn’t come to Ventura. It’s very promising and exciting!”

“The city asked us to take a hiatus because of the spike in COVID,” explained Lance Sterling, owner of Sterling Venue Ventures, which operates several nightclubs in Southern California, including The Canyon in Agoura Hills.

While The Canyon hasn’t been in operation for months, Sterling had been presenting shows at OPAC. A temporary use permit allowed him to offer drive-in live music concerts, called Carpool Jams, in the parking lot. In addition, he opened a full-service restaurant onsite with a large outdoor patio where Sterling and the Ventura Harbor Comedy Club partnered up to present the Canyon Comedy Club, featuring a mix of live comedy and music.

The restaurant patio had to close for three weeks under California Gov. Gavin Newsom’s most recent regional stay-at-home order. While the drive-in events could have continued, Sterling decided to take a break from those as well after speaking with Oxnard city officials. It was just simpler in some ways, too.

“The rules have changed so many times,” Sterling said. “I don’t think we had two weeks [of programming] in a row.”

The three-week shutdown is yet another setback in what has been a devastating fiscal year. While audiences and entertainers appreciated the live shows,  the venue itself didn’t make a lot of money.

“Our revenues are off by 96 percent,” Sterling said. “My monthly payroll is 10 times the amount of revenue we bring in.”

“The hardest thing for me,” he continued, “is just the way the rules are structured in California. It hurts small businesses.” While Live Nation, for example, has received over $1 billion in loans to stay afloat, Sterling says smaller concert promoters and operators are frequently denied and risk going out of business. “The government is endorsing a monopoly.”

A few bright spots: The Montclair facility remains open, and Sterling has had a good response to his new online auction.

These include instruments signed by Buddy Guy, George Thorogood and other luminaries of rock and blues. Two new guitars will be offered every week. Money raised goes toward paying Sterling’s employees and contractors. In addition, anyone who buys a guitar will be added to a “foundation member list” with special privileges and benefits when The Canyon is able to open again.