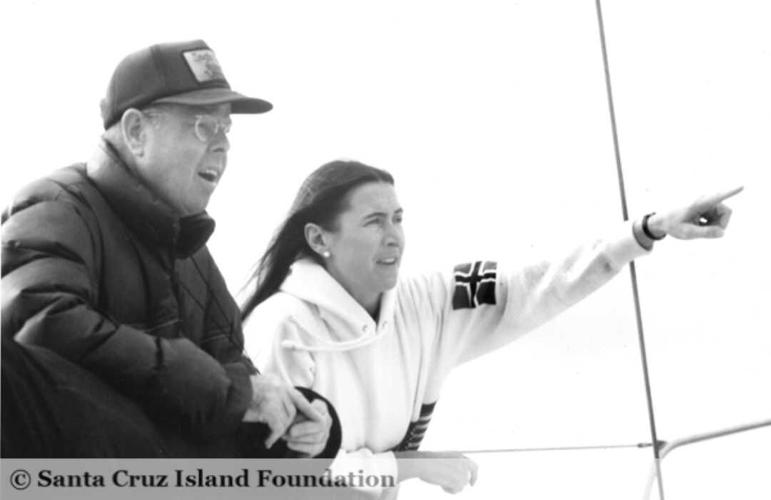 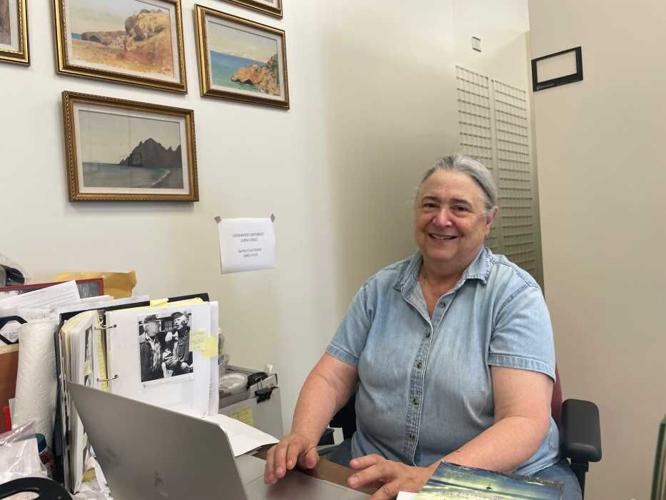 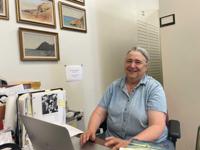 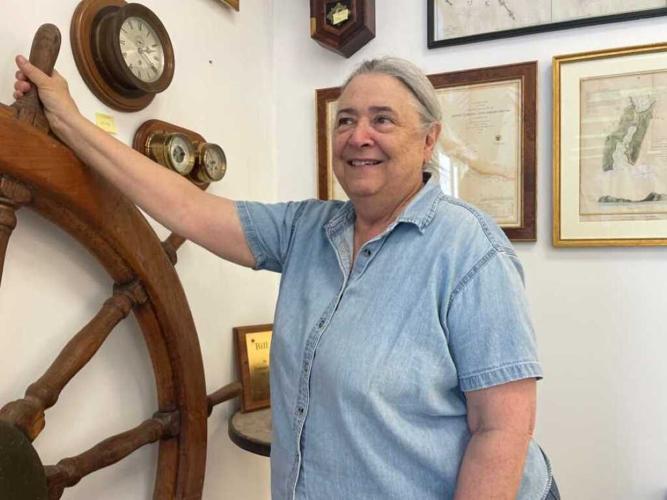 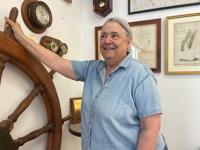 Exhibits are being installed at the Chrisman California Islands Center. Photo by Alex Wilson

Marla Daily had just graduated with a degree in cultural anthropology from University of California, Santa Barbara, in 1973 when she got a job offer to work as a cook.

But the kitchen wasn’t in a restaurant; it was at a research station on Santa Cruz Island. The job led to a lifelong legacy of educating people about the history and wonders of all eight islands off the Southern California coastline.

Daily’s professor had won a National Science Foundation grant for a dig. Daily would have the opportunity to help with research when she wasn’t in the kitchen. Her first time traveling to her new job, Daily said she approached the main ranch and research station on a rough dirt road through a eucalyptus forest, and had a revelation that proved to be prescient.

“I looked up and the trees were over 100 feet tall and they were so magnificent. There were ravens. And a fox ran across the path of the Jeep. It was a wet year and we were crossing a stream eight or nine times as we drove three miles up the canyon. I very distinctly said to myself, quietly, in my own private thoughts, ‘I don’t know how, but I want this island to be a part of my life.’ That’s an honest, true story,” Daily said. “Little by little, my dream came true.”

From personal assistant to president

Early on during her island job, Daily was shuttling food between the research station and main ranch when she had a meeting that changed the course of her life.

“This man came walking out of his office and said ‘You there.’ And I turned around and realized, ‘Oh my god, that’s Carey Stanton, the man who owns the island.’ He opened the door to the office and said, ‘Come in, sit.’ And of course I dutifully did what he said.”

The chance meeting led to a lifelong devotion to the Channel Islands, as well as a commitment to Stanton’s wishes that the history of the ranching era on the islands be preserved forever.

Daily got to know Stanton better while working at the research station and was even invited to formal dinners at the historic ranch. In 1980, Stanton hired Daily to be his personal assistant, a job she performed until he passed away in 1987.

“He left the land to The Nature Conservancy and he left his personal collection and archives to his own foundation, which he formed in 1985,” she explained.

Daily has since written dozens of books and articles about the islands as president of the Santa Cruz Island Foundation, a charity dedicated to saving the histories of the islands and telling their stories. The foundation is developing a new museum in Carpinteria that will be free to visit for the public and open to researchers interested in the largest existing collection of island artifacts and documents.

After Daily started working on Santa Cruz Island, she became curious about all the other islands.

She spent a week with the ranching family that formerly owned Santa Rosa Island, and another week at a wildlife research station on windswept San Miguel Island.

After making more island trips and realizing she was the first woman to set foot on all eight of California’s Channel Islands, Daily founded the “All Eight Club” in 1994. While today it’s relatively easy to travel to the five islands (Anacapa, Santa Barbara, Santa Cruz, San Miguel and Santa Rosa islands) that make up Channel Islands National Park, as well as Catalina Island to the south (accessible from Long Beach and Los Angeles), it takes special permission to visit the two Islands owned and operated by the U.S. Navy, San Nicolas and San Clemente.

“It’s the most elite geographic club known in the United States,” Daily said, adding that the collection of people who have been to those islands numbers fewer than 250 members. “There are fewer people who have walked on all eight islands than have visited the International Space Station. You have to be really dedicated and really want to do it.”

The Santa Cruz Island Foundation is now embarking on its biggest mission yet: developing the new Chrisman California Islands Center, which is expected to open next year at a highly visible location in downtown Carpinteria.

The foundation bought a vacant bank building for $3 million in 2019 on the corner of Linden and Carpinteria avenues. The foundation already had $1.5 million set aside for a building; the rest of the purchase was funded by Roger and Sarah Chrisman, Santa Barbara philanthropists for whom the center will be named. The final fundraising push is underway to finish the approximately $6 million job.

“We were homeless on the mainland. We realized we needed an anchor for our future,” Daily explained. “And as I’m coming to the end of my working career, I have the responsibility to leave behind an asset that is of value to the public in perpetuity.”

The center has numerous displays currently under development on island history and live video feeds from the islands, so visitors on the mainland can feel like they have an immediate connection. There will be a sculpture garden outside including a newly created bronze of the famed lone woman of San Nicolas Island, who was featured in the novel Island of the Blue Dolphins.

“We’re hoping that it will be a magical, inspirational experience where if they know about the islands they’ll feel comfortable and familiar and still learn more. If they’ve never been to an island, when they leave, they’re going to want to go to at least one if not all eight,” said Daily.

She said she’s proud of the legacy she will leave behind, both with the new center and the research scholars will be able to perform using the archives.

“I’m most proud of continuing Carey Stanton’s wishes and legacy that there be something preserved about the history of the California islands. That was his passion and I’m just a servant with my education and my research in ensuring that happens. I’m very proud of this facility and our reputation. I’m proud of our publications and the team that’s made this possible.”

More on Marla Daily and her writing at marladaily.com.